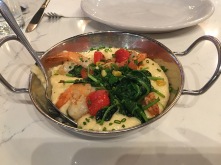 January 2020: Unlike the end of 2019, new year started off pretty somber. The lack of sun and warmth limit my energy. I didn’t dance much nor did I have a lot scheduled after work. I celebrated my fourth year on campus. I started in wintersession where there are less than 10% of students on campus, everyone is still in their festive post-holiday moods, and the dining facilities offer limited choices. I’ve always looked forward to the beginning of January as the time to catch a breath and regroup from the frenzied fall. This year was different—I didn’t schedule a weeks-long vacation and we had to start preparing for the board meeting as soon as we came back. Much of January is a blur, though I was able to attend a memorial service in LA, take another water aerobics class, take a short-story writing workshop, and begin to audit a poetry workshop on campus. The highlight of the month was the second Art Salon on the theme “Solitude.” This time I wrote a poem to accompany one photo presented by each photographer.

February 2020: I stocked up on brunches, lunches, and dinners this month–some homemade. My friend & I started our research to verify the list of best pancakes in Boston, starting with the soufflé pancakes at Bootleg Special. We shared a stack but they’re so airy that you can eat one by yourself and not feel full. I also revisited some places I had been before. On the poetry front, I was the featured poet at the Poetry Out Loud competition at Sacred Heart High School in Kingston where I visited an AP English class back in October. The winner of the this local competition placed 3rd overall in Massachusetts. I also attended a poetry workshop with Joan Naviyuk Kane through the Brookline Poetry Series. And on the 24th, I became an aunt again.

March 2020: March brought a double life of its own—before and after we started to stay home during a crisis trying to work. The month began with Super Tuesday—remember way back when? Colleges started to close their campuses and shift to a remote format. My college made the call on Thursday, March 12th in the middle of a class period. There were a lot of tears, but somehow, the students were able to regroup and organize their own graduation ceremony before they had to leave campus. This class entered college before the 2016 presidential election, so they’ve been tested already. I started working from home under the interim telecommuting policy at first, which then shifted to working from home for the “foreseeable future” after the governor ordered non-essential businesses to close and extended that order until May 4th.