One of the first poems in my chapbook that was published was “Transit of Venus,” which was inspired by the 2012 event that will not happen again until 2117. What I saw with my own eyes (black drop / crossing / the sun / dipping down / curving around / up again) is now visible in some amazing pictures from a joint project between NASA and the Japanese Aerospace Exploration Agency. I consider the Venus poem the first in a series of poems about the planets I intend to write. Last year, Construction Magazine published “To Earth, From Mars,” the second planetary poem, and I wrote “Pluto, My Brother” at my last Cave Canem retreat (back in my day there were 9 planets). My poetry-date partner, Kelly, says the Pluto poem is ready to send out, so I’ll be spending some time this weekend in the Poet’s Gym (aka UNC Davis Library) figuring out where it should land.

I love writing about the planets and other objects in the universe. They are like our distant relatives: made of the same stuff but existing in a different era. Poetry offers a unique way to consider the beauty and individuality of each body as well as explore the myths and folklore we project onto each globe. I’ve also written  poems about the spacecraft we’ve sent to explore other objects in our universe. My biggest challenge is *getting the science right* inside the poem. Often, the scientific terms are not accessible or pleasant-sounding to the average reader. It’s my job to make the connection between science and metaphor so that we can understand each planet on its own merit as well as how it relates to our own lives.

Tonight, I will get another opportunity to write about Pluto at the Science Cafe at the NC Museum of Natural Sciences. The talk will feature some of the stunning images taken of our dear *dwarf* planet from the New Horizons probe. I can’t wait to see what these new images inspire. 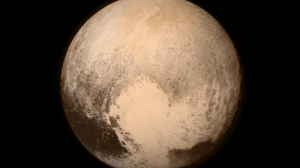