I grew up hearing, “You are known by the company you keep,” as a parental warning not to mix in with the wrong crowd. But the flip side of that is being associated with fabulous people whose joys and successes are a reflection on you. First there was the Living Poetry Meetup group of poets in the Triangle. I am part of the core group of 4 organizers trying to get our introverted brethren to come to our critique groups, book clubs, brunches at Panera, open mics, and aroma creativity workshops.

When I decided to get serious about my writing, I applied to a low-residency MFA program at Vermont College of Fine Arts. Though the outcome of any academic program is the degree, the best part of the process was being in Montpelier where I could be a poet all damn day, night, and even in the middle of the night (with apologies to William Carlos Williams):

so much depends / upon

made with cold / porcelain

glued to the tiled / floor

If it didn’t happen to me, I wouldn’t believe that I could forge lifelong friendships with people I saw less than 30 days every year. That these very same people would start their own literary journals like 491 Magazine and Uhg and Ack and organize a publishing boot camp to help me send my poems out into the world. 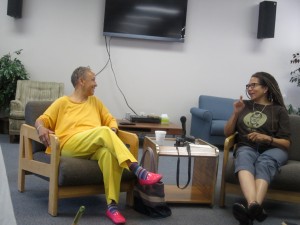 In June, I attended the 17th annual Cave Canem retreat at the University of Pittsburgh’s Greensburg campus. Cave Canem is known as the home for Black poetry and boast such alumni as the 2010 and 2011 National Book Award winners (Terrance Hayes and Nikky Finney), the winner of the 2012 Pulitzer Prize for Poetry (Tracy K. Smith), and the 2012-13 U.S. Poet Laureate (Natasha Tretheway). Talk about good company! But Cave Canem is more than just the famous faculty; it is about the fellows who scrimp and save to get there each year, people whose lives and talent inspires me to take risks with my own craft and speak from the underside of my soul.

3 thoughts on “The Poetry You Keep”